I noticed the reverse light was not working but when I checked the bulb was fine.  As it happened the lamp holder in the reverse light housing just needed some TLC to ensure good electrical connection with the lamp.  However as I was checking fuses the headlight fuse had effectively melted itself into the fuse carrier.
In my 2014 Roadsport the fuse carrier is made up of 6 units of Ripca modular fuse and relay holders.  With the headlight being fuse No. 12 (from the top) then it meant breaking apart the collection of 6 modules to insert a new Ripca module.
I bought a pack of 5 modules inc. connectors from Polevault (RELF_1KIT)
https://polevolt.co.uk/acatalog/3-way-interlocking-fuse-box-plus-1-relay-socket---terminals-RELF_1KIT.html#SID=151
The unit is held in place by two set screws under the top and bottom relays with nylocs in the engine bay just behind the air filter box.  The Ripca's just slide apart, or at least they would have done if they were not superglued together.  20 minutes of messing about with a stanley knife to cut through the superglue bond and the units came apart.
The connectors need a firm push from teh front to get them out.  I used the end of the long nose pliers.  However once you get the connectors out you will see that the pins (flaps) which hold them into th Ripca carrier have been bent back on themself.  For all but two of the pins I will able to bend these back and they fitted firmly into the new fuse carrier.  However three of the connectors had broken pins.  One of the Relay spaces and two of the fuse connectors.  The Ripca kit comes with the connectors but you do need a special crimper.  I got one from Sealey.  Be carefull which way your put the connector into the crimper.  I dedcided to sacrifice two connectors to be sure I had them the correct way around. 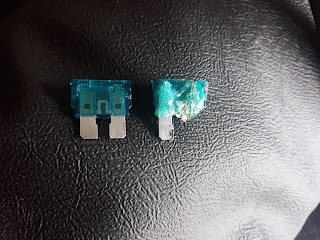 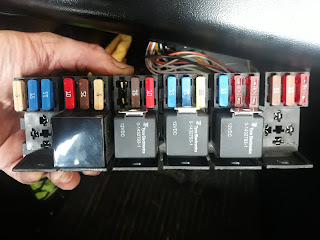 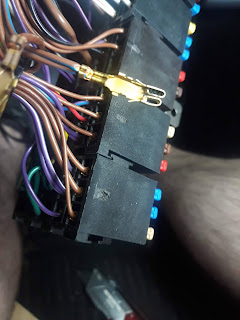 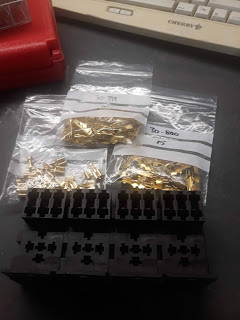 Replacement Kit (minus the one I used)
Posted by apbissell at 12:48