Having forgotten to trickle charge my car a few times and found the battery completely flat I decided to install a battery master switch.  It also gives a good excuse to tinker with the car.  The complete list of winter jobs included :

Items 1 to 3 caused no headaches but item 4 had me confused for a while with the wiring.  I used the lotus 7 club 'how to guide' regarding installing a BMS but some of it just didn't stack up for my car.  Therefore for those who wiring is similar to mine I have included some instructions below.

Does your existing wiring match the statements below :
If you have this wiring then it matches what I have and the below may be of some use. 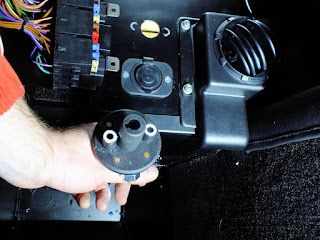 Hole drilled in vertical panel above the passengers knees and next to the fuse box.  The fixing holes have been covered in chalk and pushed up against the panel to make where to drill.

N.B.  There are four pins, 2 labelled No. 1 and 2 labelled No. 2.  The number 1 pins are normally closed when the BMS key is off or has been removed  This means that the resister connected will take any energy from the solenoid to earth when you switch the BMS off and remove the key.

Step 5
Take the back off the ignition and identify the pin which has two cables into one spade connector.  The original instructions says these are white cables but I found they were black on my wiring loom.  They were also connected to connector number 30 on the ignition.  See below. 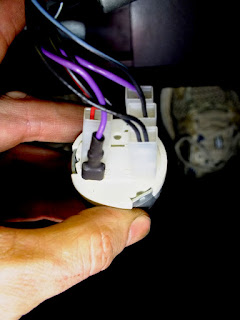 The cables I needed to disconnect from the back of the ignition were the two black ones on the lower right, connection number 30.  Keep the black cables together in the white plastic connector.

I imagine the above is a little confusing due to the connection names I have adopted and so hopefully the photograph below helps. 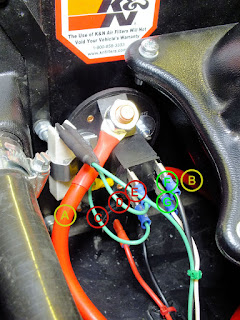 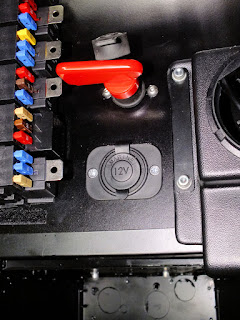 The finished switch installed with the key in the off position.