After the engine big day, the diff is the second big day.  I guess starting it up will be the next big day.  So today I put in the propshaft in, the diff in, the handbrake, the de dion, the rear dampers and drive shafts. 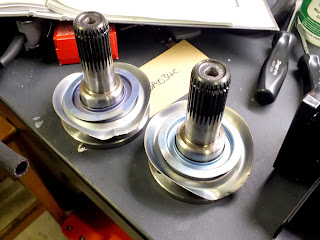 It seems a shame to have bent the dust covers in removing these.  Are they of any use to BMW owners ? 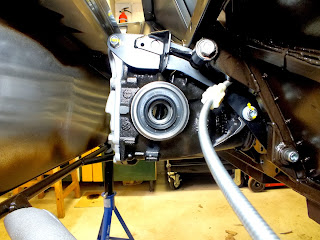 The non LSD BMW diff in place.  Luckily I had the same number of shims either side to get a 1mm tolerance on the centering of the diff.  These new metric machined chassis, takes all the guess work out of it.  The long bolt for the top also had a 45 degree chamfer on there already.  I am spoilt. 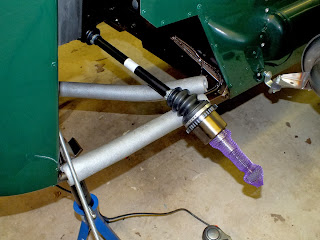 I was surprised that these required so little effort to go into the diff and also surprised they do not have dust covers like the BMW.  They seem exposed at the diff end to me. 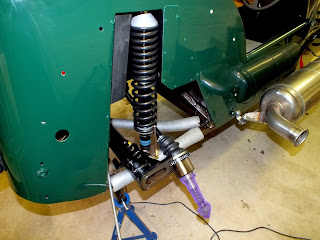 Dampers in.  De Dion in, Drive shaft in.  Not a lot else to say really. 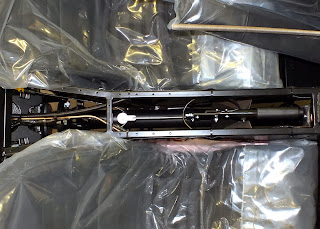 Handbrake in.  I have set this low as I don't want it in my way when changing gear.  I may regret that once the tunnel cover is in and I can't lower it.  I got covered in dinitrol doing this as I have caked the tunnel in the stuff. 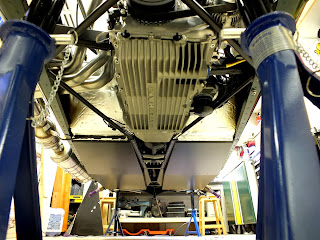 A view from below the car.  It looks very neat underneath and it all seems to line up.  I was surprised there were only 4 bolts for the prop shaft to diff plate.  I used loctite on them.  As others have said, put the car in gear, then do one of the bolts.  The out of gear to rotate the prop, then in gear to do the next bolt etc. 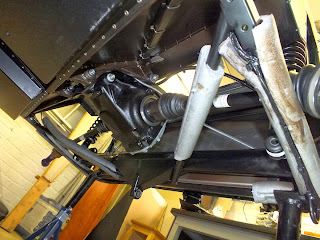 The end of the day.  Three more boxes cleared from the garage but I do have a lot of half used packages on the work bench.  Tomorrow I aim to finish the back drive system and brakes.